Sword
A wide variety of sword types are used on Maruzar, most of them curved cut-and-thrust blades. The most typical blade is about 30-36 inches long, curved, and broadest near the point of percussion for greater cutting power. Old-style Azhir sabers on the other hand have slim blades. Both come with a long hilt, suitable for either a one- or two-handed grip, and a simple plate guard.

Drujan Falchion
A short sword with a curved, cleaver-like blade broadest near the tip. It is a powerful cutting and chopping weapon that is typically issued to Drujan infantry, but it’s become popular among nomads and barbarians for its brutal simplicity and utility. Falchions are suitable as tools for butchering game, cutting open the tough roots of desert succulents for water, and so on.

Jandaharian Temple Sword
The signature sword of the Jandaharian warrior monks is a straight, two-edged weapon with a large ring pommel, through which are looped several brass rings that clash and chime with every movement. This noise affirms the Jandaharian ethic as defensive fighters who will never attack by stealth.

Keshai Longknife
The Sand Marud and Hill Marud tribes use long, heavy knives, 16-24 inches long, as tools and weapons. Each tribe has its signature blade form, hilt and pommel design, and ornamentation style. The blades are usually single-edged and may be straight, curved like a saber, curved inward like a sickle, or S-curved.

Dagger
Daggers also come in many varieties, each culture making its own signature forms. They are the typical weapon of last resort for the warrior, but they are also an important part of Maruzarian attire as they display the wearer’s cultural identity and status. Many but not all daggers can also be thrown. Close Range when thrown.

Spear
Spears on Maruzar are typically eight to twelve feet long, and used two-handed by infantry as pikes. Barbarians use shorter spears, often made of scavenged materials. Close Range when thrown.

Lance
Lances are common cavalry weapons across Maruzar. The typical lance is 10-12 feet long, and the butt is a spiked metal ball for for balancing the weapon. Sometimes the spike is long enough that the weapon is effectively double-ended. Close Range when thrown.

Halberd
Maruzarian halberds have heavy, curved cut-and-thrust blades mounted on the end of a short pole. They are used by elite infantry and guardsmen, and by the Zomiin sand monks. Halberds cannot be thrown.

Battle Axe
Battle axes of various forms are common throughout Maruzar, but are specially popular amongst the Jakharan reavers, who often make theirs from cut-down Imperial halberds. Battle axes can be thrown. Close Range when thrown.

Zhar Greataxe
This massive two-handed axe can only be wielded by Zhar, Vashtians, or Beastmen. Characters of any other race trying to wield one do so at a serious disadvantage, at least 2 Adversity dice. Created as much to intimidate as to cleave, the Zhar axe typically features an oversized, fancifully shaped blade, big spikes, and other visually impressive features. Despite the show, they are truly formidable weapons in the right hands. The Zhar axe cannot be thrown.

Zardonite Shocksword
This lightweight rapier-like weapon was designed as part of the Spaceclan envoys’ outfit, when the Zardonites realized the Maruzarians would respect them better if they wore weapons. However the shocksword can neither cut nor pierce, but instead delivers powerful electric shocks on contact. When parrying a metal weapon such as a sword, the shock can be transmitted through the attacker’s weapon and so to the attacker’s hand.

Slugbow
The slugbow is one of the commonest ranged weapons on Maruzar, used for self-defense and small-game hunting by caravaneers, nomads, farmers, merchants and other civilians. Slugbows are small crossbows that shoot slugs made of baked clay, stone, or lead. The weapon is favored for its low cost and even cheaper ammunition. You could get several hundred clay pellets for the price of a quiver of arrows. When a head hit is scored the slugbow may stun the target. Short Range, ROF 1/1, Stuns on a Crit

Javelin
A short, lightweight spear meant for throwing. Javelins with bone shafts are much used by the barbarian tribes, who do not have the means to make barsalite bows. Short Range

Bow
The typical bow is a bow made of resin-bonded barsa cane fibers, there being no more wood on Maruzar. Cheap and easy to produce, bows are among the commonest hunting weapons. However, they are far outclassed in power and range by galvanic bows. Bows are made only in the cities due to the lack of wood on Maruzar. (Nor do any Maruzarian animals produce horn of the right flexibility for Mongol-style horn bows.) Nomads and barbarians must either trade for them or acquire them as loot. Medium Range

Galvanic Bow
The powerful galvanic bow is the weapon of the elite on Maruzar. The bow’s limbs encase synthetic myofibers that lets the bow deliver more power than its draw weight, giving excellent penetration and range. Most Azhir nobles are trained to shoot galvanic bows, using them in both hunting and war. Long Range

Crossbow
Crossbows are common military weapons. Because learning to use a crossbow is much easier than mastering a bow, crossbows are often issued to aeronauts and city guards, and many mercenaries and gangsters also use them. Short Range, ROF 1/2

Hand Crossbow
A pistol version of the crossbow, meant to be used one-handed. A favorite tool of assassins, this weapon is easily hidden beneath a cloak. It’s also popular with civilians such as merchants. Close Range, ROF 1/1

Arrows and Bolts
The ammunition for bows and crossbows, respectively. They’re made of barsalite, there being no more wood available, and tipped with steel. Maruzarian arrows are not fletched with feathers, but instead are made with spiral grooves along the shaft which impart spin to their flight. A typical quiver holds 20-30 shafts.

Flintlock Pistol
Flintlock pistols are muzzle-loading, single-shot pistols that use a black powder or firespore charge to propel a ball at the target. The powder is ignited by a device using flint and steel which strike together when the trigger is pulled. Short Range, ROF 1/3, Ignores Armor, Misfires

Powder and Shot
Ammunition for flintlock pistols and muskets. The Aryamehrans standardized calibers for both muskets and pistols, and because most other firearm makers reuse Imperial musket barrels, bullets from anywhere can be used in most guns. The typical kit has enough powder and bullets for 10-12 shots.

Gunpowder is expensive on Maruzar, there being no wood for charcoal and few sources of sulfur. Instead, both carbon and saltpeter are sourced from animal dung. Others substitute firespore, the highly inflammable spores of certain fungi, but it takes twice to thrice as much firespore to equal a charge of gunpowder. If less firespore is used, the range drops by a full band, e.g. from Medium to Short.

Flamelance
Flamelances are incendiary weapons consisting of a long tube with a nozzle and igniter at the business end, and a trigger and bulbous fuel tank at the butt. When the trigger is pressed, a jet of flame shoots out up to 10 feet from the nozzle, for a total range of 15 feet.

You may expend more than 1 shot in a round to roll Advantage, +1 die per extra shot spent.

Flame Pistol
Flame pistols are small versions of the flamelance that can be used with one hand. The bulbous butt contains pressurized fuel, which is released and ignited with a pull of the trigger. The flame can reach 10 feet.

You may expend more than 1 shot in a round to roll Advantage, +1 die per extra shot spent.

Throwing Knife
Throwing knives of various forms are used throughout Maruzar. They are specially favored by those who need to use concealed weapons, such as assassins and other criminals, for they are small and easy to hide. Close Range.

Springknife
The springknife is a Jakharan invention, a detachable knife blade on a spring-loaded hilt. When the trigger stud is pressed the blade shoots out like a dart. It looks like any other fighting knife, and so often surprises its victims. Close Range.

Zakra, Jakharan
The zakra or boomerang blade is the signature weapon of the Jakharan bandit tribes. Every man fashions his own from scrap metal, so they appear in many forms: some are angled pieces of steel, some are crescent shaped, some are trefoils, and so on. Most zakra are made to fly straight, but some Jakharans also use a returning zakra, which is thrown beyond the target and strikes it from behind on the return.

Bad Return: a Jinxed roll when throwing a returning zakra can result in the zakra returning to hit you, or an ally, instead of your target. It scores Hits equal to all the ones rolled.

Zakra, Irajin
The actual inventors of the zakra are the Irajin. Like the Jakharans, the Irajin forge their zakra from scrap metal found in the ruins, but the resemblance ends there. Irajin zakra are always finely made, five-armed, and hinged at the spoke to fold for carrying. The Irajin use them both for throwing and as left-hand parrying weapons. Irajin zakra are never made as returners. Short Range

Fulgurator Rifle
The fulgurator rifle is an Iridium Empire artifact weapon that fires ball lightning. The lightning balls explode on impact, burning and electrocuting the target. Very few fulgurators remain, and present-day Maruzarians are no longer capable of repairing or manufacturing them. Ownership of fulgurator rifles is restricted to Azhir lords.

You may expend extra shots to fire a barrage of lightning balls, +1 bonus die for every extra shot spent.

You may expend extra shots to fire a barrage of lightning balls, +1 bonus die for every extra shot spent.

Sonic Stunner
Most Zardonites who leave Port Tartessos carry a sonic stunner for defense. This pistol-like weapon fires a blast of ultrasound that can knock out most animals of human scale or smaller. The power can be dialed up to stun larger creatures, or to increase the chances of an instant stun.

To stun large creatures, the GM may require a certain number of charges. For example, the GM says the Vashtian zaurgon will take 5 charges to stun because it’s so big and ornery.

Laser Pistol
Laser pistols are the usual armament of Zardonite security forces, and may also be carried by some of their explorers. Maruzarians sometimes capture laser pistols from Zardonites who meet disaster in the wild, and from defeated space pirates. Smugglers also sell them, though at astronomical prices. The Spaceclans will always try to repossess any laser weapons they find in Maruzarian hands, by force if necessary.

Bolas
Some hunters, specially the Jakharans, use bolas, a set of cords knotted together and with stone or lead weights at the ends, for hunting and for taking captives. Victory with a bolas entangles the target, either at the legs to cause the target to trip and fall, or at the arms to disable weapon use, or even the neck, which causes choking. Often Jakharan bola cords are lined with broken glass or metal spikes, making them grip more tightly and more difficult to remove. Close Range, Entangling, Spiked cords (for the Jakharan version)
Posted by Dariel at 9:12 AM

Swords of the Four Winds

Eleven tales of swords and sorcery set in the ancient East! Get it now! 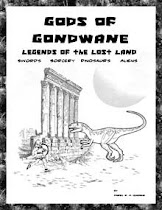 Swords. Sorcery. Dinosaurs. Aliens. Get it at RPGnow! 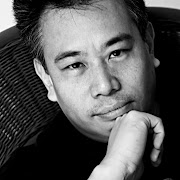